Don’t get your hopes up

“You can’t do it,” I told myself two winters ago as I curled up in a chair and dabbled essential oils onto my pillow. A film of images reeled through my mind of the next few years. I would be alone. Lost. Without purpose. Trapped in the house like an agoraphobic. A failure, finally–and worse things.

I was blind to the potential for my own progress–that I would travel to California or get accepted into a masters program or fall in love. I experienced all of this and more, and yet, four months ago, in a parking garage in Kentucky where I would begin my master’s in creative writing, the same thoughts ticked in my head.

You can’t. Don’t get your hopes up.

How many times have I thought this to prepare myself for the worst? Someone doesn’t answer their phone and I think the unimaginable has happened. I feel a strange pain and Google it until I discover I either have a common cold or cancer–but it’s most likely cancer. I say things like, “I can’t wait until…” when I’m actually thinking “But what if…”

It has taken me a long time to realize that the main reason my mind jumps to worst case scenarios is because of my desire for security and control. I think that, somehow, if I think the worst, then I will be better prepared. I build walls and peer into the future from behind barred windows while training myself through imaginary battles, believing that this current suffering prepares me for the next thing.

One of my phobias is getting sick. It bothers me so much that I’m saying “getting sick” rather than the actual term (there are many–but you know what I mean). I have had this fear since I was about ten, which was the last time I “got sick.” That means that, for the past fourteen years, I have been worried about something that has never happened despite the odds that it would. Not only is this a tragic waste of time, but it also hints that maybe being a “worst case scenario” kind of person doesn’t prepare me for the worst but makes me suffer when nothing is wrong and when I could be enjoying the present.

I’ve been doing a lot of research lately on optimism. It turns out there a lot of benefits to optimism, including having longer, happier lives. Of course, my first thought is, “How discouraging! I’ll never make it!” That’s because, for much of my life, I have believed that either you are a pessimist or an optimist, and you can’t change that.

But this is not true. Optimism can be learned.

Let me say that again just to make that sink in…

Optimism can be learned

If you are a worst-case-scenario person, you don’t have to be. Isn’t that a relief? But here’s something else I’ve learned that’s very important.

It’s okay to be the way I am. Imagine what the world would be like without people who think carefully about potential outcomes. We “pessimists” make the world go round. But there is a balance. I’ll call it “Poptimism.” People in this category are able to think realistically but hope for the best. They don’t waste time worrying. They let go of the need for certainty or control.

If I could go back and live this way and think positively about every situation I was anxious about, I would have been able to enjoy the present and be freed from all that wasted worry. Because most of the time–and I mean almost all of the time–things turned out okay.

So how do I change my attitude? First, I acknowledge that it’s okay to be optimistic. Choosing pessimistic thoughts may make me feel more prepared, but, in the end, even if something bad happens, I won’t ever be more prepared because I gave it a good worry. “Who of you by worrying can add a single hour to your life?” Instead, I would have been more prepared if I had entered into it with a good attitude. Optimism does not equate naivety. In fact, having the faith that I do, optimism should be the logical outcome!

Second, I practice positive thinking. This takes lot of effort, but here are some of the things I have tried and read about that really help.

I try to start each morning in scripture, in prayer, and in gratitude. I journal about at least three things I am grateful for and about what I am learning. I try to think about a wide range of things from the past, the present, and the future, big or small. I have been reading a wonderful book that I would recommend to anyone called One Thousand Gifts by Ann Voskamp. I wish I could impart to you all of the knowledge wrapped up in that little book, but you’ll just have to read it. All I can say is that she has shown me that we are called to a life of thanksgiving. By recognizing the gifts that God has given, we accept those gifts and His joy. If we have made a habit of negative thinking, then it takes a lot of work to create a new, gratitude habit.

The news can be depressing. While I don’t think ignoring the news or blinding ourselves to the world is a healthy way to live, I do think there are times when we are less equipped to handle the negativity. During these times, I remind myself that God is in control of the world.

Some people just rock positivity. It comes naturally to them. These are the kinds of people you can safely talk to about your negative thoughts. They will challenge them and keep you on track. If we sometimes think optimists are unrealistic, they often think otherwise. I mean, what really are the chances that your sniffles are caused by a rare tropical disease?

Other people might need to be avoided for a time if that is healthy for you for a time. Then, you can just limit that time or even try to be an uplifting presence in their lives. It’s amazing how contagious a positive attitude can be! Don’t make them feel like they have to always be positive, though. Even positive people might need to express a negative feeling every now and then, so be ready to listen. Cheering up others is a great way to cheer up yourself as well!

The same goes for media. I listen to positive music, read books that give hope, and watch uplifting films. Again, sometimes I am more prepared to take in darker content and see the light in all of it, but other times I need to swallow up goodness until the bad thoughts are flooded out.

If I desire to be positive in the big things, I have to start small. Today, I was discouraged about a story I was revising. My thoughts went negative fast. But then I chose to replace those thoughts with something better, and it actually helped reshape my attitude. So if I think something negative, I ask myself how I can turn it around. If that’s too difficult, I distract myself until I am in a better mood or have the capacity to challenge it. This is so important. Our minds our like open fields that we have forged paths upon. If we forge a path in a negative direction, we’ll likely continue to take that route because it is the easiest to get through. We have to forge new paths for our thoughts to go, and this starts with the little things.

Accept Moods as they Come

I am easily discouraged by a bad mood. I think I’m spiraling into a big black hole that I can’t get out of. I think that being sad is a defect somehow. Maybe that’s because the world keeps telling me I shouldn’t ever be sad. But I find that it gets easier and easier to go through those rough moods if I just accept them for what they are and don’t give them any more power than that. It’s like a stomach ache or a stubbed toe. It’s uncomfortable, but it will pass, and it does not define me.

Similar to gratitude, savoring focuses on the sweetness of life–from the color green to the warmth of a hand to hold to the very glory of God in our everyday, mundane lives. Take it all in. Be thankful for your ability to, as C.S. Lewis wrote, be “a sort of palate,” receptive even “down to one’s soft slippers at bed-time.”

You know this one–scientifically proven to uplift your mood/balance your mind.

I’m new to this, but I have found it helpful using the Headspace App. For instance, one meditation had me notice if a distraction came from a feeling or a thought. This helped me recognize that anxiety can come from a feeling or a thought, but those are just external things. They have no power over who I am or what I do. I have also become better at stopping and breathing and grounding myself when I need to.

I have a thing some people call “success amnesia.” Writing down things that God has gotten me through reminds me that I have grown, and exponentially so. If that’s the case, I can get my hopes up that the future will be even brighter.

C.S. Lewis wrote that “Joy is the serious business of heaven.” So often, we are Marthas–distracted and worried by the cares of the world. But we are called to be Marys–resting at our Savior’s feet. While we are on earth, we have things to do, tasks to accomplish, trials to face. But let’s not forget what we are called to do–to love God and to enjoy Him forever; and to love our neighbors. To have joy. To be thankful. To seek out the kingdom of God, which, I believe, is nearer to us than we can ever imagine.

3 thoughts on “Get Your Hopes Up: Daring to be Positive”

What are you looking for? 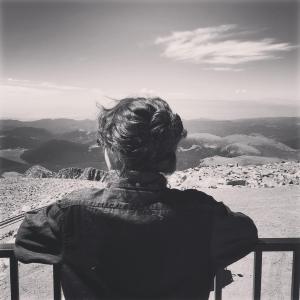 I would love to share more of my heart with you. By subscribing by email, you will receive updates, words of encouragement, and a download of my free ebook, The Redeemed Imagination: A Personal Essay.

Recent Posts from Write What You Love: Emily Brooks

Just Keep Writing: When You Feel Behind

Just Keep Writing: Everything is Derivative